As we get older, spots on our faces and foreheads become more pronounced.


Age spots are not only "sun spots" as often depicted. They can also be the result of repeated injury to the skin. For example, I developed an age spot on the side of my nose from wearing glasses over many years, and spots on  my forehead from repeated injury by rose and pyracantha thorns as I struggled with my garden.

Of course, one should show one's age spots to his/her GP and have them investigated, if warranted, to rule out invasive cancer. However, if an investigation is not warranted, a traditional treatment is the application of Bread Soda, a treatment I have used effectively to get rid of the spot on my nose and to greatly reduce my forehead spots. Bread Soda has also been used by Irish people to reduce the prominence of freckles.

Here is a recent picture of myself, where I show that the "glasses" spot is completely gone and the forehead spots greatly reduced and on the wane: 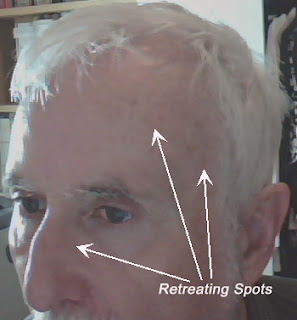 Bread soda is exfoliating. To avoid thinning the skin excessively, rest the spot after a week's daily application. To make a start, you can begin by filing down the spot with an emery-board nail file. 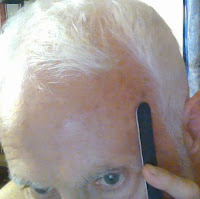 Then, mix one spoon of bread soda into one spoon of aloe-vera body cream, to make a thick ointment-like cream to apply daily to the spot for a week.

I had some raised spots on my body that I showed my doctor thirty years ago. He said they were "dead spots," in other words spots of dead skin. They were no harm and would, he said, disappear if I kept moisturising them. I moisturised them religiously for over 20 years, but they remained unmoved. I applied bread soda, but it failed to penetrate. Then I filed them down with an emery-board nail file, after which bread-soda demolished what was left of them.

Spots on the skin are like weeds in the lawn. They have two parts: the "foliage" over the ground and the "roots" under ground. Remove the surface element with the nail file to let the bread-soda and moisturiser work on the "roots."

Note: bread-soda is not a whitening agent. It gets rid of white, or light-coloured spots as well as dark spots, returning the skin to its natural colour.

There is a growing belief in bread-soda as a treatment, not only of harmless skin spots, but of malignant cancers, as well as having multiple other applications:


Read all about the wonderful qualities of bread-soda (also called Sodium Bicarbonate):

There have been reports of cures by this method when other chemical treatments have failed.

It would be foolish to rely on traditional country cures for treatment of cancer. Diagnosis and treatment by modern medical science would be advisable. However, cancer is often caused by life-style and diet and can, therefore, often be avoided by avoiding toxic foods, such as sugar and, perhaps, wheat, and following Hippocrates' advice: "Let food be your medicine and let medicine be your food!"


Wheat Belly: Lose the Wheat, Lose the Weight and Find Your Path Back to Health

I was reminded of the benefit of sea-salt recently, when my big brother remarked that swimming in the sea (off a sandy beach) wore down the hard skin on the soles of his feet. I recall the healthy glow one felt as a child after swimming in the sea. Once, when I was a child, I had been treated all winter with a prescribed medicine dropped onto a wart I had on my hand. We should, in retrospect have filed the wart down first. The wart persisted despite all the treatment, but on the first swim of the Summer, I found, when I came out of the water, that the wart had gone.

You don't have to swim in the sea to get the benefit of sea-salt. Dissolve a tea-spoon of sea-salt in a jug of hot water. Allow it to cool and transfer it to a clean bottle, from which a drop at a time can be poured onto the palm of your hand, to be applied. like a moisturiser, to the face and body. Unlike other chemicals rubbed into the face, it does not sting the eyes, but rather lubricates them.