This is the time of the year when I head off to the Canaries for some Sun Therapy. Time, then, to review what I know of the dangers of sun and what policy to adopt to sun exposure.

When I visited the Tiwi Islands, one of the first things my guide, Fonda, (going by his western name),  said was:

"In our language, white people are known as 'Hot Red Faces.' However, the laugh is on us now, because the white people no longer get sunburn,  but we do."

This was a few years ago, when the Ozone Layer was in the news. I guessed the reason the Aboriginal Australians were now getting sunburn was due to the increase of Ultra Violet rays due to the depletion of the Ozone Layer, but I was wrong.

I questioned Mr Fonda about his diet when a child. If you wanted a meal, you could wade out into the sea and capture a fish with a spear or a net, or your bare hands. Alternatively, you could put your hand into a hollow tree and pull out a tasty snake. You had as many helpings of sea vegetables as you liked, as well as  coconuts (green or ripe and in various preparations) and shellfish, ducks, certain small animals and birds, wild birds' eggs, green leaves, native wild vegetables, roots and fruits.

I soon read, in the book "I, the Aboriginal," that the Tiwi islanders were not the only indigenous people in Australia to begin to suffer sunburn in recent years. This author described how, when he was young, he spent 24 hours every day naked in the open air, with maximum sun exposure, and never got burned, but now, in his westernised job and life-style, he had become subject to sunburn. He reckoned it was probably due to spending more time indoors and becoming sun-soft. He was wrong in that conjecture.

When I came to visit the town of Catherine, I met a schools' inspector who had a large area, as large as Munster, of  bush, sparsely populated by aboriginal Australians, to supervise. One of her surprising pieces of information was that the native children were now suffering from chronic rhinitis (blocked and runny noses and sinuses) and that the department of education had introduced a programme of nasal saline-rinsing to relieve the symptoms. Now, when I was a child, I had this condition, and was on a similar programme (my rinse being a solution of salt, bread-soda and boric powder). The rinse gave me a temporary relief, but the symptoms quickly returned. When my mum brought me to a new doctor, the programme was changed, and I was put, instead, on Scott's Emulsion. 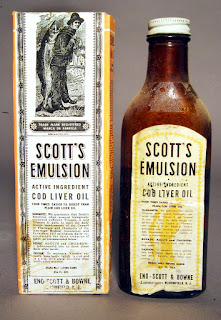 Scott's Emulsion cleared the condition, and I needed no more saline rinses.

When I got home from Australia, I searched the Web for Scott's Emulsion and found its main ingredient was Cod Liver Oil. The main therapeutic substances contained in Cod Liver Oil are considered to be Vitamin D and Omega 3 oils. (Warning: today's Cod Liver Oil is not cold-pressed, like it used to be, but distilled. The distillation processes removes the Vitamin D and other anti-oxidants, and usually synthetic Vitamin D is added).

Then, was it possible that the native Australians, who spent so much time in the bright sunshine, were lacking in Vitamin D? The answer was Yes, and it was provided by Patrick Holford. His theory is that the sun will create Vitamin D in the skin only if it finds certain catalysts in the skin. These catalysts include a sufficiency of Vitamins A, C and E.

Then, despite all their sun-exposure, the Australians were now suffering from a lack of Vitamin D, because of a change in their diet. Whereas 50 years ago they were still living off the native diet, nowadays most of their food comes off the supermarket shelf. The Western Diet does not supply them with a sufficiency of the vitamins and anti-oxidants necessary to convert sunshine into Vitamin D. What's more, the western diet feeds their bodies with inflammation-stimulants - and sunburn is a form of inflammation. The items that stimulate inflammation in the western died include Omega 6 oils (found in processed foods and polyunsaturated vegetable oils), grains and sugars.

To avoid sunburn, the aboriginals, and you and I, need to follow this programme from wellnessmama.com :

The "foods" listed in the "Avoid" list were totally absent from the Aboriginal diet. The items in the "Consume" list constituted the whole of the Aboriginal diet (except dairy and tomatoes; they must have had an alternative source of lycopene, such as watermelon, papaya or guava).

This programme more or less coincides with my previous programme, which I find is vindicated. In addition, I apply aloe-vera gel to the skin, morning and evening. (For the first few days I apply P20-once-a-day sun protection, till I get used to the sun). Aloe Vera is not a sun block, but it contains a natural supply of Vitamins A, C and E, and other anti-oxidants, which prepare the skin for the sun, and also soothe any mild burning that occurs.

Wellness-mama also recommends a number of supplements to enhance the body's supply of vitamins,  anti-oxidants and omega 3.