Research reported by the American Journal of Medical Care, in January 2021, found that a drop in levels of Total Cholesterol and LDL Cholesterol in the blood tests of men is an early indicator of the onset of Parkinson's disease.
Parkinson's appears without warning, so the researchers decided to examine the routine blood tests of People With Parkinson's taken over a period of years before the appearance of the disease, and compare these to the blood tests of a control group.
One factor stood out in the data pertaining to men (a drop in Cholesterol) and a completely different factor in relation to women (a rise in blood pressure).
No other factor showed any relevance.
Similar research in Korea confirmed this finding, but also reported evidence that the taking of statins may have been causative of the drop in Cholesterol, causing the onset of Parkinson's.
This Korean research was answered by research in Italy, which found that some PWPs (Persons with Parkinson's) had stopped taking statins long before the onset of the disease, (in response to a drop in Cholesterol or loss of muscle tone), inferring that the taking of statins was not causative of the Parkinson's. However, the editors of the scientific journal in which this research was published added a note to this report that it should not be taken as evidence that statins are recommended for PWPs.
I, myself, stopped taking statins in 2007, after I had a back-muscle spasm, and I suspected (despite being advised to the contrary by my medical advisers) that statins were causing a loss of muscle tone all over my body. I have noticed a recovery of muscle-tone in the 15 years since then. My picture, here, shows, that, while I am no Charles Atlas, I now have a fairly normal biceps, which was non-existent after four years on a light dose of statins. (I am not suspect of having Parkinson's. While my LDL is considered high, my HDL ratio is normal). 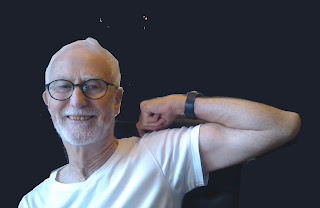 All research confirms that high levels of HDL (the "good cholesterol"), coupled with regular exercise, slow down the advance of Parkinson's. Unfortunately, due to loss of muscle tone in those who have the disease, it takes greater will-power to take the necessary exercise.
The brain, which uses 25% of the body's total cholesterol, has a high need of this magic stuff. It is needed for the re-generation of brain cells, among a host of other things.
Advocates of Keto diets assert that best sources of Cholesterol are animal fats (from eggs, meat, milk, fish) and that these foods are also associated with high HDL. They surmise that the reason they are so is that animal fats, in the diet, are added directly to the blood stream, and that unused natural cholesterol returns promptly to the liver to be discarded. It is not the total cholesterol, or level of LDLs (often called "bad cholesterol") which is important, but the ratio of Total Cholesterol to HDL (in other words the ratio between cholesterol dispersed and that returned). A normal ratio indicates that the lipo-system is performing normally.
Where the body cells do not have sufficient natural cholesterol, the liver is called upon to manufacture the stuff from carbohydrates, and this, say the Keto advocates, is an unhealthy process, particularly if the person is relying on bread and sugar for energy intake.
According to Keto advocates, a diet based on fats and proteins produces a lean, potentially muscular, body, (noticeably losing fat in about 21 days on a no-carb, increased fat, diet), but a diet based on carbohydrates, particularly wheat and sugar, produces an obese body. Gurus like Patrick Holford advocate a balance between complex carbs and fats, and reducing reliance on wheat and sweet foods by adding other complex carbohydrates, such as quinoa, seeds, and oats.
Statins interfere with the normal functioning of the liver and may deny cells the cholesterol they actually need, giving rise, perhaps, to many potential side-effects, including possibly triggering Parkinson's.
Other research, however, finds that statins may be beneficial in offsetting the advance of Parkinson's and other age-related diseases. If in doubt, ask your doctor?