By the age of 74, I found I was taking an anti-histamine tablet almost every day.

This was necessary to keep my allergies and insensitivities at bay.

Then I decided to read up about histamine and anti-histamine, to see if the situation could be improved. I discovered the term "histamine intolerance." This changed my life. Well, it enabled me to do without anti-histamines most of the time, including all during this year's (2018) very high pollen season, while remaining free of symptoms.

Histamine is a substance found in all living human bodies that plays a large role in inflammation. There are about 200 organic "Amines," of which Histamine is, of course one, and Amino Acids form a category. When a body is being invaded by a virus or bacterium, our immune system reacts by launching inflammation to fight the invader. This is done by the Mast Cells in the Blood releasing Histamine, which then binds with a "receptor" to perform some function such as dilating a blood vessel or releasing mucous into tissue. Unfortunately, when a body is too well supplied with histamine, it can start inflammation even when there is no invader to fight: hence the modern diseases of hay-fever, asthma, rheumatism, arthritis, and insensitivities to various foods, pollen and physical conditions.

In my case I am subject to migraine, hay-fever, blocked nose, runny nose, sinus inflammation, weepy eyes,  sore throat, sneezing, shivering, and so on (nothing very serious, but all a nuisance). My sleep apnea might also be included in the list. My osteoporosis can be attributed to the same cause. (When I reached 70, I took a dexa scan, as part of a general medical examination. Surprise! I actually had osteoporosis).


I tend to react to cold (when my body temperature drops or I am exposed to a fresh wind), pollen, dairy produce, sugar (white mouth ulcers on the side of my tongue), bread (red mouth ulcers on the roof of my mouth), chocolate (migraine), and so on.

In all cases, the idea of histamine intolerance, suggests that the cause of all these symptoms may not actually be intolerance to anything: it could be the build up of excessive quantities of histamine in the body. Then multiple random items or situations can trigger various different forms of inflammation. The total and singular answer to all the illnesses might, therefore, be simply to control the amount of histamine.

"Histamine Intolerance" is a bit of a misnomer. Histamine is present in every cell in the body, carrying out essential functions. Nobody is actually "intolerant" of Histamine. The condition is more accurately described as "Histamine Overload" or "Histamine Over-activation." It is because the body is overloaded, or because over-release is triggered, that the troublesome inflammation occurs.

A Plan to Control Level of Histamne

There are four prongs in an effective plan to control the build-up of histamine:

The First Element: Avoid foods that cause a build-up of histamine

There are three groups of foods that cause a build-up of histamine-activity:

When foods mature, proteins in the food convert to histamine.

All foods contain some histamine, but fresh foods (fish, meat, vegetables eggs and fruit) are lower in histamine than preserved or matured foods. The longer meat, or other protein food, lies outside the freezer or fridge, the more histamine it develops.

Fresh fish should be kept on ice to prevent the build-up of histamine. It goes without saying that it should not be kept too long anyway. The bacteria that convert histidine in the fish's flesh to histamine is dormant below 7° C. Bacteria that  cause fish to putrefy are dormant below 10°, so there is a window in which histamine will accumulate without making the fish smell.

Apples, picked just short of total ripeness , individually wrapped in straw or newspaper, and stored in a dark, dry, cool place, (or otherwise stored in climatically-controlled conditions), will retain their freshness for a year. Languishing on a supermarket shelf, however, they will accumulate histidine.

What about aged beef? Aged beef is carefully kept at between 1° and 3°, and at controlled humidity, so it is not likely to be a culprit. Informally butchered meat allowed to rest at a slightly higher temperature is more suspect.

A Matter of  Degree

Several web-sites give extensive lists of histamine-rich foods. However, all foods contain some histamine. Whether a food is so rich in histamine as to cause a build up of histamine in the body is a matter of degree and individual tolerance. For most sufferers, a simple rule of thumb is sufficient: avoid mature cheese and preserved or fermented foods and eat foods when fresh and freshly-cooked.

Some foods, like spinach, tomatoes and cocoa, while relatively "high" in histamine, may, nevertheless, be neutral or beneficial, i.e., if they have anti-inflammatory properties that more than negative the influence of the histamine.

Eat tomatoes when bright red and hard. Discard if dark or soft. Histamine accumulates as the fruit ripens.

My Downfall: Cheese, not Cream

I thought I was intolerant of dairy produce; however, it turns out that, while cheese was my downfall, cream is actually beneficial. I recall that in my childhood, a doctor had recommended to my mother she give me cream off the top of the milk to control my runny nose. (The remedy later became Cod Liver Oil, which contains similar vitamins). What about butter? Well, because it is fat, not protein, it is low in histamine and safe if not rancid. However, it is not fresh like cream, and rancid butter is definitely a problem. Yogurt can't be trusted, because it contains protein and is the product of fermentation.

Whether yogurt is good or bad, from the histamine point of view, depends on the actual cultures in the particular yogurt. Most variants of the bifidus culture are anti-histamine, while several of the lactobacillus cultures are pro-histamine. Bifidus alone, however, can unbalance the gut culture.

Some foods, though void of histamine, can, however, trigger inflammation, by activating the body's store of histamine. Citrus fruits are often cited in this regard. (Three foods that have been traditionally thought of as triggers of migraine are cheese, chocolate and oranges). In my case, sugar and wheat are two triggers; Chocolate, also, but possibly not unsweetened cocoa, in moderation.

Research data in 2018 suggests that many people formerly thought to be gluten-intolerant (but not coeliac) are, instead, affected by the Histamine build-up caused by gluten-rich foods. See:


(New Research) Is It Gluten Or Is It Histamine?

In his book, Win the War Within, Floyd H Chilton PhD, exposes Omega 6 oils as the major cause of inflammatory disease. He shows that Wild Salmon contains the right balance of Omega 3 and Omega 6, but that Farmed Salmon has excessive Omega 6 and is a cause of inflammatory disease. This is because, while Wild Salmon feed on algae, Farmed Salmon are fed sunflower seeds and other foods already rich in Omega 6. It is not  clear if Irish Organic Farmed Salmon, which are fed on off-cuts of fresh fish, are included.

Salmon and Tuna are often listed as Histamine-rich foods. Tinned versions are certainly prone to be histamine-rich. Farmed fish may contain excessive Omega 6, and be triggers of histamine over-activity, but I doubt if the fresh (or frozen), wild versions are. Neither seem to cause me any  problem.

There is a strong relationship between histamine over-activity and blood-sugar. This is investigated in the following web-site:

This excellent site suggests that excessive sugar intake can be the root cause of histamine intolerance.

Carbohydrates convert to sugar when digested and are, accordingly, the third group of  foods to reduce or eliminate from the diet.

I summarise some of the effects of histamine build-up in the following diagram: 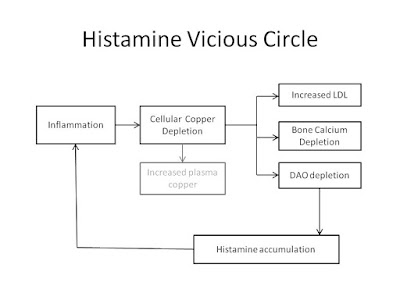 The reduced consumption of carbohydrates should be compensated by an increased consumption of natural fats (Cream, Olive Oil, Oily Fish, Beef, Lamb, Chicken, and Pork fat, eggs, avocado, etc.),  remembering that a gram of fat contains twice as many calories as a gram of carbohydrate. Fortunately, fats and oils are sating, which means it takes only a little of them to feel full, whereas you never feel full when eating carbs. (The list of oils does not include sunflower oil or other vegetable oils that contain too much Omega 6, which also facilitates inflammation).

So, the second leg of the histamine cure is intermittent fasting and to reduce carbohydrates and increase consumption of natural fats, except Omega 6.

The easiest way to implement intermittent fasting is to skip breakfast. In this way, eating nothing between 8 o'clock at night and 12 o'clock mid-day, gives the stomach a grand, 16-hour sleeping period in which to recover the levels of DAO and other benefits. If the fast must be broken, then break it with strawberries and cream, rather than bread, cereal or potatoes. There goes my green porridge!

The rejection of carbohydrates should not go too far. Carbohydrates are a necessary food but should not be taken to excess. Patrick Halford, who twenty years ago launched the Low GL diet, argues the benefits of complex carbohydrates that release their energy slowly. Porridge (from wholegrain oat flakes) is a particularly healthy food that fuels the body for hours. I can vary my fasting routine to skip breakfast some days and include it on other days; the important points being to give the tummy plenty of rest, avoid sugar and high GL carbs and bring moderate amounts of fat back into the diet.


Skipping breakfast is one method of Intermittent Fasting. Another way is to have a substantial breakfast, skip lunch and have an early dinner. According to stories passed down through the generations, the legendary Fianna, robust warriors of ancient Ireland, had but one meal every day, and that just before sunset. After eating, there was music, song, stories and poetry around the campfire. By all accounts, one-meal-a-day was an extremely healthy lifestyle.

You don't have to be histamine-intolerant to benefit from intermittent fasting or reduced consumption of carbohydrates!

The problem with histamine is that it causes inflammation. Many foods have an anti-inflammatory effect. The fourth element of the action to control histamine/ inflammation is, therefore, to eat inflammation-fighting foods, like garlic, ginger, turmeric, olive oil, black pepper, red pepper, thyme and tomatoes. Include such in your daily diet. Even if some of these (like tomatoes, strawberries and spinach) are histamine-rich, their over-all effect is usually a reduction in bodily histamine and in inflammation. They are said to activate histamine to self-destruct.

It goes without saying that any health program must contain an element of physical exercise. Get out for a walk every day, and do a bit of work in the garden, gym or swimming pool.

Having followed this regime for a year (I am now 75), I can  report that I no longer need to take anti-histamine, except once in a while, and am completely free (at the moment) from my various symptoms.

Anti-histamine drugs do not actually reduce the level of histamine in the blood: they frustrate the functioning of histamine, but allow it to continue to build up. Controlling the build-up by fresh-food diet and intermittent fasting is a lot more effective.


Review of my Actions

At the same time that I read up about Histamine, I also pursued some other investigations, so that the changes I actually made at the time were several, and all may have contributed to my improvement in "allergy" symptoms:

Even Histamine-intolerant people (about 10 per cent of the population) can, of course, be affected also by other agents, which can cause similar symptoms, such as Bacterial and Viral Infections, Actual Allergies, Food Poisoning, Insect Bites, Accidental Injury, Hormone Imbalance, Eating Disorders, Mast-cell Disease, Leaky Gut, Parasites,  Cancer, Sepsis, and so on. As always, unusual symptoms require medical diagnosis.